Home / Gillespie to Retire at End of School Year

Gillespie to Retire at End of School Year 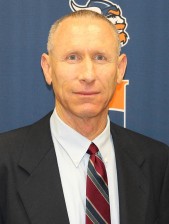 Midland University Athletic Director Dave Gillespie announced that he will be retiring from his current position effective May 31st, 2021, concluding an illustrious 44-year career as a recruiter, coach, and administrator. Midland University will be partnering with EFL Associates in conducting a national search for Gillespie’s replacement.

“Dave has been an integral part of Midland University becoming one of the largest athletic programs in the nation,” Midland University President Jody Horner said. “His leadership and knowledge have been invaluable to our coaches, staff, and student-athletes. He is a man of integrity who treats others with respect and is an outstanding representative of Midland.”

His impact has gone beyond the athletic realm. He helped establish the Student-Athlete Advisory Committee at Midland and oversaw Midland’s incorporation of the NAIA Champions of Character initiative. Gillespie and his staff also partnered with Midland Student Affairs in adding Warrior Skills in 2019. Warrior Skills is a program aimed to help students develop excellent leadership and communication skills.

Gillespie is proud of the university’s growth during his tenure and appreciates the roles many have played in making that possible. “When I arrived here, it was the goal of the university to grow, and it’s been an institution-wide effort,” he said. “For us to be as effective and efficient as we have been, it truly takes a unified team effort. You have to utilize every resource you have, and that includes human resources.”

Gillespie has enjoyed several successful stints as a coach and administrator at the high school and collegiate levels. His career included a nine-year run as recruiting coordinator for legendary coach Tom Osborne at the University of Nebraska, along with four years as running backs coach under Frank Solich at Nebraska. Gillespie worked as athletic director at Lincoln Southwest High School prior to his arrival at Midland.

His career path has featured many stops along the way, and the last eight years at Midland have left a significant impact on him. “I can honestly say there hasn’t been a day where I woke up and thought I didn’t want to come to work today,” he said. “And that’s primarily because of the people I work with. Our leadership team, President Horner, and our coaches and staff have just been awesome to work with.”

Hard work and perseverance helped Courtney Thomsen excel as an athlete and coach, but it […] Read More

Women of Midland Campaign Celebrates Past, Prepares for Future